Thirty years. Ten billion dollars. Launching on Christmas morning, the Webb telescope is finally off the earth and on its way to a point in space one million miles away where it will point its eighteen gold-plated mirrors into deep space, hoping to look back in time to the beginning of the universe. The Webb is far more sensitive, especially at the low infrared radiation frequencies than the Hubble Space Telescope. It is hoped it will succeed and surpass that amazing instrument to study the formation of the universe and the most distant worlds. It will take about six months to maneuver into position and be calibrated, ready for its first observations. Bon Voyage Webb.

END_OF_DOCUMENT_TOKEN_TO_BE_REPLACED

Infrastructure for the 21st century

I long for the days when I could have a rational discussion with someone I disagree on the serious issues of the day without that person spouting a stream of totally unsubstantiated falsehoods. In other words lies. I’m pointing my finger at you, Republicans, almost without exception.

Discussions with Democrats are also often frustrating. But that is because the Democrats include a wide range of differing views and the disagreements are generally over strategy. I’m thinking of you Joe Manchin. Not over the role of government in attempting to solve problems or denying that problems even exist. And Democrats are not inclined to interrupt a serious discussion with a rude critique of your mother’s footwear. I still remember being told, “Your mother wears army boots.” I was on the first grade playground at recess at the time.

Republicans will call you every name in the book at the drop of a hat. They will insult your relatives, living and dead. And charge you with a wide variety of crimes without the slightest bit of evidence. They also live in an alternate universe where up is down, down is up, and things you can see right before your own eyes are somehow not true. They revere the framers who wrote our Constitution, except when they ignore it.

Let’s put the debt debate aside for now except for to state that the evidence is clear, economics is an art, not a science. We really don’t understand what it is going on. Starting with Ronald Reagan, Republican, yes, Republican presidents have greatly increased the national debt by cutting taxes and increasing defense spending. Yet the inflation that was predicted by my college economics teacher (we used Paul Samuelson’s Principles of Economics) did not really appear. Go figure. For more right now I refer you to a great piece by John Oliver.

What this means is, while we should be watchful, and Fed Chairman Jerome Powell seems to be, we do not have to be afraid of some Covid related economic stimulus. Republicans opposed the latest round of Covid economic payments even when Donald Trump asked for them. We also do not need to be afraid of a big infrastructure program. The Republicans are outraged at the infrastructure program, arguing that it will increase the debt and complaining that Democrats are extending the traditional definition of infrastructure.

Republicans don’t seem to have a problem with repairing the nation’s highways and bridges. Republican Dwight Eisenhower signed the legislation that created the Interstate Highway System in 1956 after all. But Republicans like highways that connect towns in rural America. Transportation projects that benefit urban areas do not get their approval. I take the New Jersey Transit train under the Hudson to Manhattan and always wonder if the crumbling tunnel, built in 1910, is going to cave in on the 200,000 people who use it every day. In 2012 the tunnel was inundated with millions of gallons of salt water during Super Storm Sandy. The water left behind corrosive chlorides, which continue to damage the already aged concrete and wiring. A Republican New Jersey Governor, Chris Christie, and a Republican President, Donald Trump, each killed a project to build a replacement.

But where the Republicans most throw up the roadblocks is where it comes to infrastructure they claim is outside of the “traditional” definition of the word. I disagree. But I also don’t care. We do not live in a stagnant word. We can be respectful of our traditions but should not be afraid to change them for the public good.

So I am on board with what some analysts are calling “Social Infrastructure”:

Social infrastructure can be broadly defined as the construction and maintenance of facilities that support social services. Types of social infrastructure include healthcare (hospitals), education (schools and universities), public facilities (community housing and prisons) and transportation (railways and roads).

I do not understand why people cannot see that the nation depends on the health of its people, and the safety, and quality of its schools. We also need a 21st century power grid and high-speed rail would be nice. Child care for working parents is an economic necessity. In an information driven society, broadband connections for the entire population are essential. Faced with tremendous world-wide competition education, research and development are all that stands between America and second-class status.

The public seems to understand this even if the Republicans do not. A Quinnipiac University National Poll finds the Infrastructure Plan is popular with the public:

And even more popular if corporate taxes fund it as President Biden has proposed:

Last but not least, expenditures on infrastructure, traditional and 21st century alike, have a large multiplier factor. Put simply, they pay off many times over. The benefits spread throughout the economy. The Eisenhower creation of the Interstate Highway System is credited with creating the long post-war expansion of the American economy. Studies show tax cuts for rich people and fiscal policies which benefit Wall Street do not have this positive effect. The proposed infrastructure projects should be seen as an investment in America’s future.

GameStop – The Casino at Broad and Wall

Posted on February 8, 2021 by Scott Gurvey Leave a comment

I thought it was a very strange story. “Analysts confounded by GameStop price moves” read the headline in the business section of one of the world’s most widely read newspapers. “Recent volatility in the stock of GameStop has confused analysts following the video game retailor” read the lede line.

That there had been great volatility in the price of a share of GameStop was not debatable. The stock was trading below $20 a share at the end of 2020. On January 29, 2021 it hit $325. That’s a jump of 1,625%. If you had bought 100 shares on December 31, you would have paid $2,000. On January 29, one month later, your 100 shares would have been worth $32,500. If you think you understand the stock market that is a mindboggling increase. Certainly one to “confound” and “confuse.” But as your intrepid reporter wrote in my primer for the National Center for Business Journalism, stock markets are not what they used to be.

END_OF_DOCUMENT_TOKEN_TO_BE_REPLACED

Posted on January 4, 2018 by Scott Gurvey Leave a comment

In my recent post on mutual funds, I noted that John Bogle disrupted that industry with Vanguard, a mutual fund company that specialized in low cost index funds designed to mimic rather than outperform major market indexes. The other mutual fund companies responded with their own index funds, and there is intense competition between them

Exchange Traded Funds, ETFs, are another refinement of the fund category. They will certainly figure into your reporting on the fund asset class because they are by some measures the most popular of all exchange traded securities.

For my primer on ETFs, see businessjournalism.org.

In a previous post about indexes, I identified the Dow Jones Industrial Average and the Standard and Poor’s 500 as the two most frequently referenced. They originated as short-cuts that summarized market trends, and are often used as a benchmark against which investment performance can be judged.

There has been an explosion in the number of indexes in recent years. There are hundreds if not thousands available, enough to slice and dice the markets in as many ways as can be imaged. Some are broad-based, like the NASDAQ Composite with more than 3,000 stocks. Others might track a region, like the EURO STOXX 50, based on 50 large companies in the Eurozone. Some follow companies of a certain size, like the Wilshire US Small Cap. And still others focus on an industry, such as the NYSE Arca (originally AMEX) Semiconductor Index.

Posted on December 14, 2017 by Scott Gurvey Leave a comment 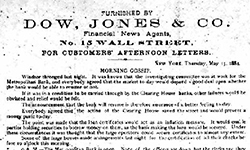 Business reporters can get up to speed on market indexes with a backgrounder on the Dow and S&PIn my first Financial Market Reporting piece, I complained that many reporters make casual reference to “the market” without specifying what they mean. Usually, I wrote, they mean the Dow Jones Industrial Average, which I called the “best known” stock market measure. The DJIA is just one of a multitude of stock market indexes that pop up in virtually every discussion of the markets, including reports evaluating individual stocks and other investment vehicles. So they warrant a closer look.

The DJIA was not the first stock market index. It was not even the first index created by Charles Dow. In 1880 Dow, who was 29 years old, moved to New York and got a job at the Kieman Wall Street Financial News Bureau, which furnished financial news to banks and brokerages. In those days there was a lot of “fake” news, designed to tout companies and their stocks. But the Kieman service had a reputation for sticking to the facts.

Dow figured if one responsible news service could succeed there was room for more, and with a fellow reporter, Edward Jones, founded Dow, Jones & Company. The pair produced newsletters and summaries of financial news, which they delivered to financial institutions and investors. Their “Customer’s Afternoon Letter” quickly grew to have more than 1,000 subscribers.

Posted on February 24, 2017 by Scott Gurvey Leave a comment

I remember one specific lunch with Paul Kangas. Silly, isn’t it? I spent a fair amount of time with Paul during the many years I was associated with public television’s Nightly Business Report. That included several meals with a man who, among many other things, appreciated good food and drink. Why would one particular lunch stand out?

It was 1990. A year before I had moved from Chicago, my hometown, where I worked for CBS, NBC, and as a freelance contributor for NBR, to New York. Here I was NBR’s New York Bureau Chief and Senior Correspondent. Paul had been with NBR since it first went on the air in 1979. A former stockbroker, Paul was at first the broadcast’s stock commentator. Later he added co-anchor to his role.

But Paul was so much more than his title implies. On a broadcast that itself defined a new role for business news on television, Paul set the standard for both the program and the industry.