The Preachers of Hate

Posted on November 2, 2018 by Scott Gurvey Leave a comment 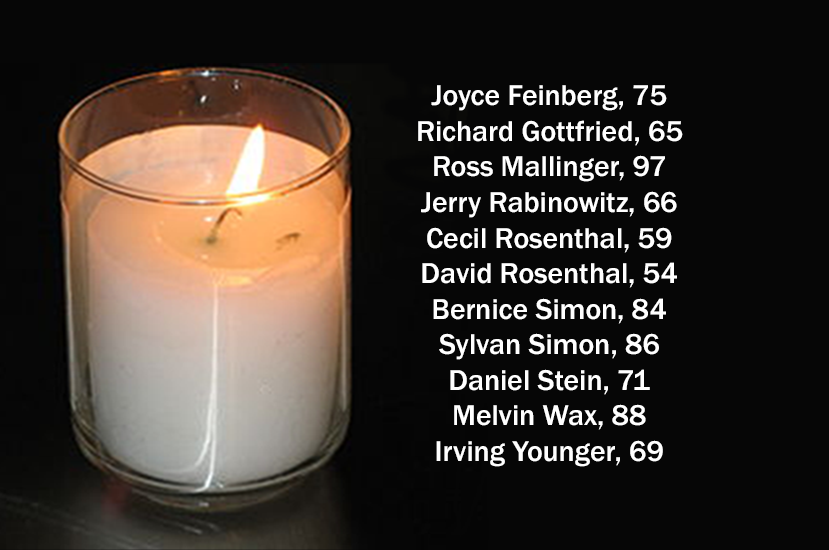 The last of eleven funerals was held today. Eleven people, shot dead in simply because they were Jewish.

A federal grand jury has charged 46 year-old Robert Bowers with 44 crimes including hate crimes resulting in death. Bowers has pleaded not guilty. So we’ll do the journalism thing and note that he is the “alleged” assailant and that he is considered innocent until proven guilty. We will also note that the indictment alleges that on the morning of the Sabbath, October 27, 2018, Bowers drove to the Tree of Life Synagogue in Pittsburgh, entered the building with multiple firearms, and opened fire. He also engaged public safety officers, wounding several before he was wounded and captured. While inside the Synagogue, Bowers made several statements indicating his desire to “kill Jews.”

It was the deadliest attack on Jews in U.S. history. But of course Jews have faced many millennia of persecution and oppression and even in America Jews are no strangers to anti-Semitic incidents, which an Anti-Defamation League audit found rose 57% in 2017.

Yes, Bowers is deranged and yes, most responsible Americans don’t really mean to advocate religious murder when they rant and rave about threatening “outside” forces “invading” and “replacing us.” But it is more than about time they accept responsibility for the climate their irresponsible actions create. A climate in which dastardly deeds are not only acceptable, but a logical solution to the perceived problem presented by anyone who is not like themselves.

Even without his statements at the Synagogue, Bowers’ social media footprint makes his motive clear:

HIAS, founded as the Hebrew Immigrant Aid Society in 1881 to assist Jews fleeing pogroms in Russia and Eastern Europe, declares its purpose is to, “Welcome the stranger. Protect the refugee.” It is not surprising. This has been a core value for Jews for some time. See Genesis 18:1-22:24.

But what has clearly caught Bowers’ attention here is the concept of “invaders”. And we all know where that comes from: 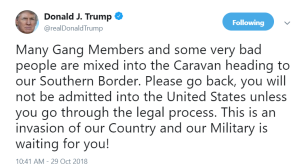 HIAS does help people seeking refuge in the United States. And just in case you missed that dog whistle, consider, President Trump Trump also says he ‘wouldn’t be surprised’ if an unfounded conspiracy theory about George Soros funding the caravan is true. There is no surprise in that comment either. Trump rather famously refused to condemn white supremacists when they marched in Charlottesville, Virginia, wielding flaming torches and shouting, “Jews will not replace us” ahead of deadly violence, Trump said there were some “very fine people on both sides”.

George Soros has become the whipping man and proxy for all the anti-Semitic claims of the right. Soros is not only Jewish, unlike Trump he is also really a self-made billionaire and has taken the giving pledge, promising to donate most of his wealth to worthy causes. There is no evidence that Soros is helping to fund the so-called “caravan”. But that hasn’t stopped mainstream Republicans, from Trump on down, from repeating the rumor.

Fox talking heads Laura Ingraham, Maria Bartiroma and Lou Dobbs have suggested that the migrants are getting outside funding. And Cesar Sayoc, the Florida man authorities have accused of mailing more than a dozen bombs to people who have criticized Trump, appeared to be obsessed with Soros, mentioning him dozens of times on one of his Twitter accounts.

A whole catalog of Republican elected officials have joined the anti-Semitic chorus:

That Tweet, adding Tom Steyer and Michael Bloomberg, two other Jewish billionaire philanthropists who support progressive causes, came from Kevin McCarthy, the Republican leader in the House of Representatives. If the GOP retains control of the House this man could be the next Speaker of the House.

And then there is the case of Radio Marti’, part of the Trump administration that broadcasts to Cuba, which reportedly aired a Spanish language program earlier this year describing Soros as a “multimillionaire Jew” and repeating some of the right wing conspiracy theories about him.

This is the climate in which demons like Bowers and Sayoc flourish. These are weak men, spurred to action by the words and examples of far stronger men dedicated to the cause of retaining power through any means necessary and exploiting the fears of others. They want us to be afraid. They need us to be afraid. So they whip up controversy over a few thousand mothers and children heading our way. They tell us that we are unable to sort out the real asylum candidates, which we are required to accept by our own law, from the handful of those who will seek to take advantage of the situation to sneak into our country. To meet a few thousand mothers and children, Trump talks about sending 15,000 regular soldiers of the United States Army, to stand in addition to the Border Patrol, National Guard and local police authorities already at the border.

Are you afraid? Don’t be. And don’t let the preachers of hate get to you. Remember the principles on which this great country was founded. Never again.

This site uses Akismet to reduce spam. Learn how your comment data is processed.