Posted on September 8, 2016 by Scott Gurvey Leave a comment 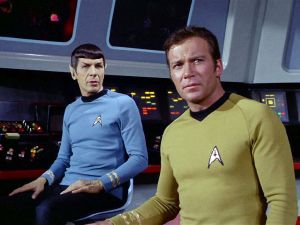 50 Years. It is hard to believe. I still remember where I was and who I was watching with on September 8, 1966, when Star Trek premiered on NBC. If only we knew then what we know now.

The anniversary has triggered a deluge of comments on social media and, as is usual in this day and age a great deal of controversy. And why not? The original series, now formally known as TOS, has been followed by four more, plus an animated series. And a fifth is on its way. On this date we can also count a franchise of 13 films. I’m not going to even try to total the number of novels, comic books, works of non-fiction about the Star Trek world and the success of the concept. Or the number of doctoral dissertations written about this phenomena, or the number of college courses taught on Star Trek themes. It is all a moving target.

And because in these days of social media anything and everything becomes an issue for debate, it should be noted that while many commentators see Star Trek as a noble venture which presented sensitive and controversial issues to a world not ready to openly discuss them and encouraged generations of young people to pursue careers in the sciences, others see Star Trek as a fable describing a Utopian world to which even it was not faithful. Like most of these disputes, where is some truth in both positions.

It is true that Gene Roddenberry, Star Trek’s creator, saw his vehicle as a subversive instrument for getting the ideals of a world where race, sex and nationality no longer determined outcomes before a nation not yet ready to face these issues head on. At the same time, Star Trek was first and foremost an entertainment. And by the standards of the day a failure, never achieving a huge audience and surviving only 3 years. But something resonated and syndicated showings of the original 80 or so episodes, it depends how you count, brought generation after generation into the Star Trek universe. The result is a unique chapter in the history of culture still being written.

On the science front, I find it fascinating, with apologies to Mr. Spock, that we celebrate the 50th anniversary of Star Trek on the day NASA plans to send a satellite on a mission to orbit an asteroid, collect a sample, and return it to earth. The journey continues.

This site uses Akismet to reduce spam. Learn how your comment data is processed.