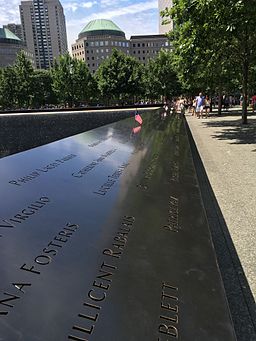 I did not go to witness the ceremony of remembrance at the 9-11 Memorial today. I am never comfortable when I am at the 16 acre site of the World Trade Center in Manhattan. It’s not the memories. Those come and go depending on what is going on in the world. It’s the images which lingered before me for months after that day. Now they almost never return. Unless I am at the site.

On September 11, 2001, my wife Amy and I lived in Battery Park City in lower Manhattan. We had moved there from midtown just a few months earlier. Our apartment building was at the south end of the neighborhood, south and west of WTC Tower #2. I was the New York Bureau Chief and Senior Correspondent for public television’s Nightly Business Report and the newsroom/production facility/broadcast studio was just across West Street, even closer to the tower, due south of the site. Tower #2 filled the window of my bedroom, and of my office.

I was putting on my tie when I heard a noise I later described as the sound of a dump truck unloading gravel at my feet. Running to the window, I saw smoke coming from the top of tower #1, the view partially obscured by #2, which was closer to me. I had been through the 1993 terrorist attack on the World Trade Center, so I did think of that. But I thought in terms of a bomb planted inside, or an explosion on one of the equipment floors toward the top of the building. It was 8:46am.